All of us, family, friends, colleagues, or just first time observers knew one thing, when listening to Hermann Haus, one immediately sensed class, intellectual excellence, clarity of thought, sense of scientific history and simply, an aura of a profound presence. These elements of greatness in Hermann Haus we will no longer be able to relish. On the evening of May 21st, 2003, after cycling from MIT to his home, Hermann Anton Haus, Institute Professor at MIT suffered a fatal heart attack.

Prof. Haus, born August 8, 1925, in Ljubljana, Slovenia, in the former Yugoslavia, received his early technical education in Austria at the Technical University of Graz and the University of Vienna. He moved to the U.S. in 1948, earning a B.S. from Union College in 1949, an M.S. in electrical engineering from Rensselaer Polytechnic Institute in 1951, and. Sc.D. from MIT in 1954. Prof. Haus joined the MIT faculty in 1954, where he served as an Institute Professor until his sudden death.

There are rare individuals who energize fields to take it to new heights while others support its vigorous development. Prof. Haus was such a rare individual in the field of quantum electronics and optical communications, having extensively published pioneering works spanning nearly half a century, with both fundamental and applied optical and electronic research. His peers and admirers recognized him with their highest awards such as the Optical Society of America 1994 Frederic Ives Medal, the Austrian government’s Wittgenstein Prize awarded for outstanding contributions to humanity, and the National Medal of Science in 1995 from US President Clinton.

Prof. Haus (Life Fellow IEEE) was a member extraordinaire of the IEEE LEOS, contributing vigorously either via his lively educational talks or his pioneering presentations across the globe. Always approachable by both senior and younger members of the community, Prof. Haus’s elegant personality and teaching style won many undecided young minds into studying the beauty of optics. For those fortunate enough to have known Prof. Haus, like myself, he was a role model and statesman for optics scholars, always encouraging and providing a listening ear for his younger colleagues.

As exemplified next, Prof. Haus commanded great respect from his contemporaries who admired not only his technical prowess but also integrity and friendship.

“Hermann Haus was one of the great leaders and pioneers in the field of Quantum Electronics and Optical Communications. His contributions and interest spanned a wide spectrum from fundamentals to applications, from science to technology, from academia to industry. He made key contributions to the understanding of noise in electron tubes and in lasers, to the fundamentals and applications of ultrashort optical pulses, to intricate interactions between solitons in optical fibers and the spontaneous emission of optical amplifiers leading to the GORDON-HAUS jitter, to the conception of the quarter-wave-shifted distributed feedback laser, and many more. He was a master in the bridging between science and technology, between university and industry where he spent a great many sabbaticals. Each of these sabbaticals in industry seems to have led to yet another technological breakthrough. Reflecting this broad range of interests are his elections to both the National Academy of Science and the National Academy of Engineering. His inquisitive mind and love of learning seemed to know no bounds. Just a few weeks ago, believe it or not, he was talking to me about Slovenian poetry. Many of us in the research community feel that we have lost a very unique and precious friend.”
Herwig Kogelnik, June 4, 2003.
Lucent Technologies – Bell Labs

“I first met Hermann in 1948 when we were students in Electrical Engineering at Union College in Schenectady, NY. I was a freshman and he was a senior. He was one of several students from war-torn Europe to come to Union. Even as a student, he left a lasting impression. Later, when he was a professor at MIT and I was a PhD student at Harvard, he saved me from a physically unrealizable thesis. At that time, he proved that the Manley-Rowe relations for circuits also held in distributed systems. Thus, it would not be possible to make a ferrite parametric amplifier with signal frequency greater than the pump frequency, despite the wishes of my advisor. Over the years, I had many other opportunities to admire his wonderful scientific insights and his ability to explain them. I also had occasions to witness his generous nature. I will miss him.
Ivan Kaminow, June 5, 2003
Kaminow Lightwave Technology

“It was a great pleasure and enlightenment to be close to Hermann Haus during my time at MIT and the early days of non-linear optics. He has played an important role in development of non-linear optics and optical communication. The Gordon-Haus noise formulation has his name attached, but is only one of many contributions”.
Charles H. Townes, June 5, 2003
Nobel Laureate Physics,
University California – Berkeley

“Dr. Jim Gordon and Prof. Hermann Haus published a famous paper that shows timing jitters caused by amplifier noise limit the error free distance of all optical soliton transmission systems. As the initiator of the all-optical soliton system, I felt necessity of responding to this challenge and came up with a simple solution in early 1991. The idea was to use frequency filters at each amplifiers. On an early summer day of 1991, I had a phone call from Hermann. He started talking somewhat in an embarrassed way about the work that Yuji Kodama and I just prepared for Optics Letters that describes this solution. Apparently, Hermann with Dr. Mecozzi have come up with a similar idea and reported it at the Gordon Conference in the summer 1991. First, I had no idea what he was talking about since he started asking whether my colleague or I had attended the Gordon Conference and heard about their work. I was also embarrassed hearing from him but explained that our work had been done much earlier and had no knowledge of Mecozzi’s work. The conversation has cleared Hermann’s doubt that we might have abused their work and we regained our close friendship. Their work was published in December 1991 issue of Optics Letters and ours in January 1992. Ironically they were in different volumes but the received dates differ only by one week. Herman gave challenge against my all-optical transmission concept and later presented the solution, while I, being an optimist, knew I could solve the problem and succeed in doing so. My special admiration of Hermann is his sincere interest in science and continuous curiosity on intriguing problems as indicated in the episode. He has kept this attitude until the last days of his life.
Akira Hasegawa, June 6, 2003
Soliton Communications,
Kyoto, Japan

“I have known Hermann Haus for over 40 years and I have always been very impressed by his work in optoelectronics. I have also enjoyed meeting him at many international conferences. I hold Hermann Haus in great regard.”
Nicolaas Bloembergen, June 6, 2003
Nobel Laureate Physics,
Harvard University 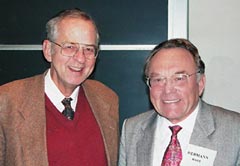 “Hermann Haus will be sorely missed by many, including me. He was ever involved in a vigorous search for large and small truths. Our association goes back many years, principally because he came to Bell Labs every few years to stir things up. One of these visits resulted in our paper on what became known as the Gordon-Haus effect. Hermann came along asking critical questions about light wave soliton transmission, and in this case I had an answer. Hermann was not always right, but as my old boss, Rudy Kompfner, was fond of saying, if you are always right you are not being adventurous enough. If your time is up, a swift passage is a good way, but now is never the right time. My wife, Susie, and I were very fond of Hermann and Lennie, and we will miss him.”
James P. Gordon, June 10, 2003.
Lucent Technologies – Bell Labs

“At MIT, Hermann Haus was renowned as an outstanding teacher – writing textbooks and teaching undergraduate as well as graduate courses in each of the last six decades. He wrote 7 books, obtained 20 patents, and published over 380 papers – an astounding 200 of them since the age of 65. Hermann received MIT’s Killian award, the highest award the faculty confers on one of its own, and he was appointed Institute Professor, MIT’s highest faculty position. We have many distinguished faculty but not many whom have been elected to the National Academy of Sciences and the National Academy of Engineering and the American Academy of Arts and Sciences. Hermann was more than just a great scientist/engineer, he awed us with his knowledge of languages, history and the arts – and with his energy and enthusiasm for life. His death is an enormous loss to MIT, to our profession and to all of us who knew him personally.”
Erich Ippen, June 10, 2003
MIT, Electrical Engineering &
Computer Science Department

Prof. Hermann Haus will be remembered in history for his eye opening contributions to optics and his ever-energetic presence that has inspired many of today’s optical leaders. As a vibrant IEEE LEOS member, he will be greatly missed. On behalf of the officers, staff, and members of the IEEE LEOS international community, sincere condolences to Prof. Haus’s family and friends on this eternal loss. In memory of Prof. Haus, donations may be made to MIT, Hermann Haus Fund, 77 Massachusetts Avenue, Cambridge, MA 02139-4307.
By Nabeel A. Riza
Vice President, IEEE LEOS-Memberships, Americas
Professor, School of Optics/CREOL
University of Central Florida
June 10, 2003