At the RIA Induction Ceremony on May 22, 2020, held on-line for the first time, RIA President Dr Mary Canning added: “Ireland should be immensely proud of these women and men who have brought international acclaim to our country. As members of the Royal Irish Academy, they will strengthen our capacity to provide the expert advice Ireland needs at this time.”

For RIA May 22,2020 Press Release Please Go To https://www.ria.ie/news/membership/29-new-members-admitted

For YouTube Video of May 22, 2020 RIA Induction Ceremony Please Go to https://www.youtube.com/watch?v=4ggqRmRYEzc 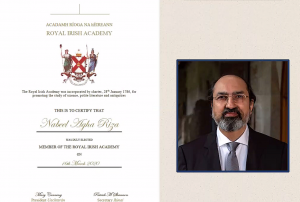