Nabeel A. Riza, Head of the School of Engineering and Chair Professor of Electrical and Electronic Engineering (EEE) at University College Cork (UCC; Cork, Ireland), and colleagues have demonstrated the Coded Access Optical Sensor (CAOS) – Complementary Metal-Oxide Semiconductor (CMOS), or CAOS-CMOS camera with a 30 dB improvement in camera dynamic range when compared to a conventional  CMOS camera [1]. Using extremely bright and high-contrast test targets, it was demonstrated that the potentially high-speed camera has exceptionally low interpixel crosstalk and—using silicon-based photodetection—can operate from the ultraviolet (UV) to the near-infrared (near-IR) wavelength region.

In the CAOS-CMOS camera setup (left), an incident high-brightness, high-contrast scene is analyzed by two different arms of the camera that operate with different imaging modes. Image reconstruction of the viewed target scene (right) shows a scaled irradiance map (a) of the CAOS-mode-acquired image in a linear scale as well as in a logarithmic scale (b), and finally the CAOS-mode image in (b) is shown with regions of interest that were subject to electronic radio-frequency (RF) signal analysis (c). (Courtesy of University College Cork) 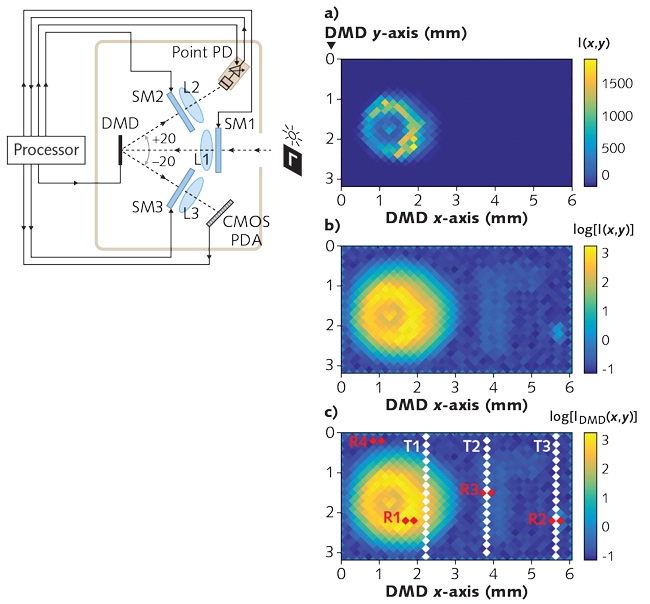 Light from an external object is directed by a lens (L1) onto the agile pixels plane of a programmable digital micromirror device (DMD). To initiate the imaging operation, the DMD micromirrors are set to spatially route the incident light to the CMOS sensor to create an initial target-scene irradiance map. Based on this initial image intelligence, the DMD is programmed in its CAOS mode to create specifically located agile pixels that sample image zones of interest.

This agile-pixel programming capability via the DMD allows the agile pixels to operate with different time-frequency coding methods such as frequency/code/time division multiple access (FDMA/CDMA/TDMA) schemes common in cell-phone radio-frequency (RF) communications. In addition, the point photodiode (PD) can be replaced by an avalanche PD, bolometer, or photomultiplier tube (PMT) point detector, while the CMOS sensor arm can also use a charge-coupled device (CCD) or focal-plane array (FPA) multipixel sensor type to enable different imaging applications across a diverse range of optical wavelengths.

All arms in the camera have an optional smart module (SM) that contains programmable optical conditioning elements such as variable apertures, on/off shutters, focus lenses, spectral filters, polarizers, and variable attenuators that can improve imaging performance, such as reducing saturation of the photodiode and CMOS sensor through electronic post-processing.

By using the CAOS mode of the imager to view a test scene with extremely bright and dim image sections, experiments confirm that extraction of both the low- and high-intensity regions of the image can be accomplished to reconstruct a high-contrast image that was otherwise partly unseen when using the CMOS sensor alone. Experiments demonstrate a CAOS-CMOS camera dynamic range of 82.06 dB, which can be improved upon by further optimization of the camera hardware and image processing.
“The CAOS camera platform, when used in unison with current multipixel sensor camera technology, is envisioned to enable users to make a smart extreme-dynamic-range camera, opening up a world of the yet unseen,” says Nabeel Riza.